[PERFORMANCE ART]  Slam Poet, Rock WILK and Director, Reg E. Gaines team up to present Brooklyn Quartet @ Pregones Theater – June 24-25, 2016, for a two-night engagement. Writer/Author/Slam Poet/Performer, Rock WILK, brings you his one-man, off-Broadway show Brooklyn Quartet (inspired by the true story of the 2006 killing of Sean Bell). This is a show that will keep you on the edge of your seat. It is storytelling. It is spoken word poetry. It is drama. It is heart-pounding action. It is a story of truth, heartbreak, compassion, understanding, and most of all, it is a story of LOVE.

“Brooklyn Quartet is a fictional tale that is bookmarked by the very real story of Sean Bell being shot to death in 2006 in an altercation with NYC Police officers. It is a story about 3 kids who grow up together in Bed Stuy, Brooklyn, who become best friends; who love each other, and who eventually almost destroy one another, and is told by an angel named Queen. It is an exploration of how life treats each of them, both individually and collectively, over the course of 20 years, quite differently, simply because of who each of them is. Saint is black, Jamaal is white and Esther is Latina. The story is sprinkled with racism, sexism and white privilege, but mainly Brooklyn Quartet is a love story; a beautifully tragic love story.”

Written and performed by Rock WILK

“The idea of theater is to create magic.  Possessing courage to allow audience freedom to imagine is magic’s main ingredient.  Brooklyn Quartet is one of those rare moments where magic and metaphor leap from the lips of characters too cool to be cliche, yet too true not to be believed.” ~ Reg E Gaines (Bring in ‘da Noise, Bring in ‘da Funk)

“There’s gonna be an opening night and then another night after that, and Brooklyn Quartet is gonna happen both of those nights — directed by reg e gaines. I get to share the stage with 3 amazing musicians named Karim (Rome) and Leo Catricala, and Corey Garcia, and it’s all gonna occur in the AMAZING Bronx; at the equally amazing Pregones Theatre — one of the most awesome places. A sacred space where I have seen beautiful work, musical and theatrical art, spiritual art, and that is, in large part, because of the magical people that make up Pregones — meaning the theater company AND the space itself. 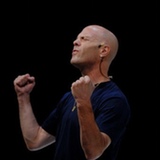 And so I’m just sayin’, it would be so cool to have you there, because we have all worked so hard to put this production together, at least I know for me, personally, it’s been over 3 years of a journey, and when you combine that with all of my collaborators work and hearts and souls and talents, I’m feeling this very exciting energy about all of the words that I have just typed right here.

And so… if you have the time and space on June 24th and/or 25th, at 8pm each night, and if you are so inclined, meaning if you are looking for a fun, and I think, provocative night of theater, then bring your beautiful selves out to this mad cool theater on Walton Avenue – just a block from the Grand Concourse, over by 149th St, just about 12 blocks from Yankee Stadium, and only a block from the 2, 4 and 5 trains at 149th, or a short 10 minute walk from the D train at 161st – and we will all get to spend some quality time together, and breathe as one, and what’s better than all of that? Nada.”

Theater-Lovers/The People: If you can handle the TRUTH of one man raising his voice to CREATE CHANGE in this world, then you want to see Rock WILK perform in his one-man show, Brooklyn Quartet. Don’t miss the directing of Reg E. Gaines and the musical styling of Karim (Rome), Leo Catricala, and Corey Garcia, all on one stage in. You are sure to walk away inspired!