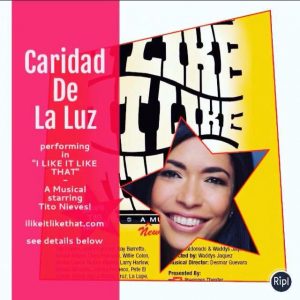 Spoken word poet, actor, singer-songwriter, and community activist Caridad de la Luz, a.k.a “La Bruja,” was born and raised in the Bronx, and attended SUNY-Binghamton. De la Luz’s poetry explores social justice and Nuyorican identity. When she debuted at the Nuyorican Poets’ Café in 1996, de la Luz adopted the persona of “La Bruja” (“The Witch”). She has also shared her work on HBO’s Russell Simmons’ Def Poetry Jam, and at the American Museum of Natural History. She has produced the album Brujalicious and the solo comedy show Boogie Rican Blvd. As an actor she has appeared onscreen in Spike Lee’s Bamboozled and onstage in Pedro Pietri’s El Spanglish Language Sandwich. De la Luz lives in the Bronx. 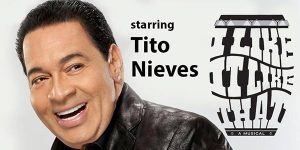 Humberto Nieves, better known as Tito Nieves, is a Puerto Rican salsa singer of American origin, known by the nickname “The Pavarotti of Salsa.”
Born in Rio Piedras, Puerto Rico and raised in the U.S., Tito Nieves began his career while participating in Orquesta Cimarron was a band from New York. In 1977 , he teamed up with singer Hector Lavoe and his Orchestra and joined the Conjunto Clasico. Then, Nieves decided to start his solo career in 1987 , besides singing salsa in English. He is known for hits such as “Love More Beautiful,” “Sleepwalker,” and hit salsa in English, “I Like It Like That.”

Tito Nieves definitely had a strong impact on the British market with its sixth production recorded all in English, “I Like It Like That.” This issue led to major venues such as the VIBE program of the television network UPN.

In 2005, he launched “Today, Tomorrow and Always” containing the successful Esa Boquita.

I Like It Like That – A Musical is the story of the Rodriguez family living in New York City’s East Harlem in the early 1970s, when music was the lifeline and proudest expression of El Barrio.

A Musical brings us back to an era when Salsa was the religion of the masses, when singers and bands became the community’s heroes and idols, and when rhythm and lyrics provided an alternative education to generations of New Yorkers.

I Like It Like That – A Musical remembers and celebrates a yesteryear proclaiming a new and hopeful era, with an accent!

“They were the best of times; they were the worst of times,” wrote Charles Dickens. The story centers on Don Roberto Rodríguez, who instills good values in his children, and faces the true grit and social chaos of the times. He works hard to hold his family together, and all the while music and imagination keeps their soul afloat!